CDP Choline is a Nootropic compound used by many as a highly-bioactive form of Choline—known to provide many cognitive benefits. CDP Choline is a common name for the chemical Cytidine Diphosphosholine and is also referred to sometimes as Citicoline.

CDP Choline is considered a dietary ingredient by the FDA and can be legally sold as a dietary supplement or a food additive. CDP Choline contains a lower amount of actual choline than other choline supplements but is a prodrug for both Choline and Uridine—linked to neuronal growth (R). This makes CDP one of the best natural Nootropics around but it has plenty of other benefits worth considering as well. 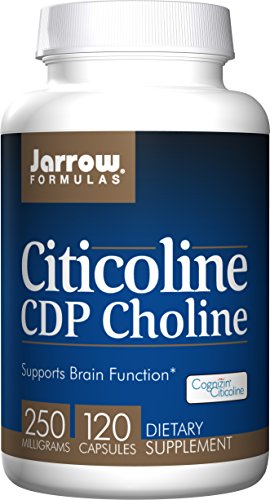 CDP Choline is one of many Choline compounds, considered to be Cholinergic, which are capable of affecting your brains acetylcholine levels. Acetylcholine is the one of the primary neurotransmitters involved in quick, rapid synaptic firing. This type of cognitive function is most commonly associated with new learning, memory formation, and complex problem-solving.

CDP Choline is known to provide many neuroprotective benefits as well and may offer much-needed help to those who have suffered from ischemic strokes. It’s especially worth noting that many who suffer from minor strokes, not qualifying for plasminogen therapies often don’t have much treatment options available (beyond the usual advice to take an aspirin.) A meta-analysis of over 11,000 cases where stroke patients were treated with some form of choline suggests this compound may one day become a regular treatment for neuronal damage from minor strokes (R).

For instance, it seems that choline is able to drastically reduce the severity and incidence of Non-Alcoholic Fatty Liver Disease (NAFLD), and the supplementation of choline in NAFLD patients has been shown to reverse fatty buildups (R). Research has shown a strong correlation between diets low in choline and the development of NAFLD. One notable exception is in post-menopausal women which are sometimes able to more efficiently utilize dietary choline.

The ketogenic diet is a powerful metabolic diet which drastically limits carbohydrate intake and increases fats and proteins. This forces the body to rely on other raw materials than carbs to produce glucose. This diet has become popular as an alternative therapy to many conventional treatments for diabetes, seizures, and metabolic disorders. The underlying metabolic mechanisms of this type of diet aren’t entirely understood.

Some research suggests that the limitation of compounds such as choline and methionine may play an integral role in such metabolic shifts characteristic to low-carb diets (R). This suggests that choline supplementation may have a negative impact on the metabolic shift towards a state of ketosis. If you’re on a ketogenic diet and plan on supplementing with choline, pay extra attention as you may be working against yourself.

The typical range for CDP Choline is within the 500-2000mg range within a 24-hour window. Typically, this would be done in divided doses, such as 500mg in the morning and another 500mg at night. CDP Choline and Choline are used to support acetylcholine-depleting nootropics such as Aniracetam, Piracetam, or Oxiracetam. CDP Choline has a half-life somewhere between 55-75 hours which means that accumulation may be an issue for some (R). If you begin to experience any unwanted side effects when taking CDP Choline, it’s advised that you consider staggering your doses between multiple days.

There are very few official reports of any negative side effects associated with CDP Choline supplementation. Doses as high as 2grams per day are commonly taken without any adverse reactions (R). There have been reports of lethargy and symptoms characteristic of depression with prolonged CDP choline supplementation. At this point, there is no research to suggest why some individuals experience this and others do not.

Choline compounds are essential to optimal health and are found in foods such a meat, nuts, and fish. CDP Choline is a novel form that has demonstrated the ability to increase neuronal levels of Uridine—making a coveted among nootropics enthusiasts. It offers many other benefits ranging from inflammatory mitigation to helping treat ischemic strokes. Overall, CDP Choline can help play a valuable role in helping to maintain health and wellbeing.

Did you enjoy this article?

Take a moment to rate this article so we know how we’re doing!

Reader Rating207 Votes4.8
The OrganicNewsroom is a participant in the Amazon Services LLC Associates Program, an affiliate advertising program that helps us earn advertising fees by advertising and linking to Amazon.com. Read our article How We Make Money for a detailed explanation of these types of services.