Coenzyme Q10 is a powerful natural antioxidant that is found in many foods and is also available in supplement form. CoQ10, as it’s often called, is typically found as either Ubiquinol or Ubiquinone. CoQ10 has become a popular natural supplement for helping to boost energy and stabilize cholesterol, among many other health benefits. Learning more about Coenzyme Q10 may help you learn how it may be useful in better maintaining your own personal balance.

Coenzyme Q10, commonly called CoQ10,  is a fat-soluble enzyme produced in the body cells. The Q10 abbreviation represents Quinone, a chemical group and 10 represents the subunits of isoprenyl present in the compound. Just like the other coenzymes, the Q10 variety aids the activity of enzymes especially in energy production at the cell level. Although for many normal human beings the production of this coenzyme matches its body requirements, some people especially the aged exhibit deficiencies. This has prompted the production of supplements that are rich with this compound in an effort to counteract these deficiencies, possibly caused by reduced production or over-utilization by the body. 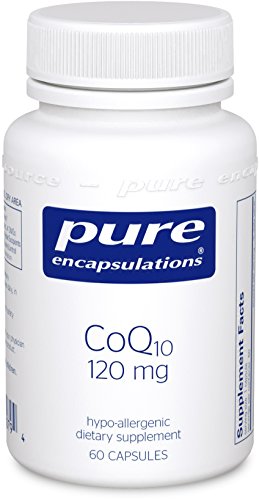 Body organs such as the heart, liver, pancreas, and kidneys are rich sources of Coenzyme Q10 in the diet as well as beef and some fish varieties. For vegetarians, they have the options of vegetables and leguminous plant varieties to source for this compound. Peanuts and soybeans are the best alternatives for protein sources rich in this coenzyme. On the other hand, broccoli, spinach, and cauliflower can substitute for people who are allergic to both legumes and meat diets.

Citrus fruits, grapes, bananas, avocados, and strawberries also have significant amounts. Given that the body requires this compound in micro-units, plant sources serve as an equivalent to meat sources. Based on research on aging deficiencies, combining at least two sources of Coenzyme Q10 is the best way especially for the aged or those with conditions related to its deficiency (R).

The relationship between this coenzyme and some health benefits has seen the development of supplements and products having the compound at high concentration. For most developers and manufacturers, the concentrations of Coenzyme Q10 by composition are relative since the deficiency and/or overdose causes no known adverse effects to the users. CoQ10 supplements have become wildly popular in recent years, and there is a marked danger of buying contaminated products if you don’t purchase from trusted supplement brands. Many of the CoQ10 supplements found online may not offer full potency, and may even contain mislabeled ingredients. Always pay close attention to brand name and look for NSF and USP certifications.

For normal human beings, this coenzyme serves to metabolize energy for cell growth and development. Due to this role in cell growth, the relationship of aging to its deficiency becomes relevant to some extent. Some studies prove this role of energy metabolism, with some even referring to it as the core of normal body functioning. In addition, it has antioxidant properties which are believed to be useful in reducing the toxicity levels in the cells. Given that it is naturally produced by the body, this detoxification role is specific to cell toxins, which would otherwise affect energy metabolism at this level. However, it is not the sole cofactor responsible for this process, but its role is recognized by many types of research. On the same note, the deficiency of Coenzyme Q10 is manifested by chest pains, heart failure, and blood pressure, although you need to consult a physician to prove this.

Heart failure is one of the symptoms exhibited by patients having deficiencies of this coenzyme. In this case, some studies have shown factual data that proves that having adequate levels of Coenzyme Q10 will reduce the likelihood of heart failure. In fact, this was the initial utilization of supplements having the compound. However, in order to increase its efficiency, experts’ advice a combination of the compound with certain herbs for better results. a study carried out in New Zealand gave a 100% significance to the use of COQ10 as a therapy for heart failure.

There is some promising research to suggest CoQ10 may help address symptoms common to Alzheimer’s and other neurodegenerative diseases. CoQ10 is known to be a powerful antioxidant that helps reduce inflammation throughout the body. Research suggests that this anti-inflammatory action, as well as CoQ10’s ability to reduce amyloid plaque deposits, making it a solid candidate for conjunctive therapy for treating conditions such as Alzheimer’s (R).

Another animal study found that CoQ10 supplementation was able to help improve the behavioral tendencies of mice with alzheimer’s-equivilent neurodegeneration. This study also noted a significant reduction in amyloid plaque deposits in regions of the subject’s brains (R). Such amyloid plaque is thought to play an integral role in the progression of conditions such as Alzheimer’s.

On the other hand, there was one smaller analysis of neurodegenerative conditions and serum CoQ10 levels that found no relationship with the symptoms of Alzheimer’s or vascular dementia (R). It seems like there’s something here, but much more research is needed.

CoQ10 has been investigated as an anti-cancer therapy in a number of human trials (R). CoQ10 has a long history of being studied as an immunomodulator and has shown remarkable healing power among people suffering from conditions such as AIDS and other immunodeficient diseases. There have been several individual case studies to suggest that CoQ10 may have a profound effect on treating cancers of many types. These cases have ranged from combination therapy with radiation, to isolated therapy (R). In some instances, CoQ10 seems to have been involved with complete remission and unexpected long lifespans. No one’s calling CoQ10 a Cancer cure—but there’s data to suggest supplementation may benefit those with Cancer.

Modern Science has discovered a strong connection between inflammation and nearly every type of disease. Whether inflammation causes disease, speeds up the progression of a disease, or is just a side effect of the disease is yet-to-be-determined. The nuances can be seen granularly on a disease-specific level in most cases but the trend itself is illuminating. In all likelihood, working to reduce inflammation will have a positive effect across an expansive set of diagnosis (R). CoQ10 is well-regarded as a powerful anti-inflammatory compound produced naturally in the human body. Ensuring adequate levels of and supplementing with CoQ10 is likely to show a positive effect on many diseases, but especially those where inflammation is considered part of the primary pathology.

CoQ10 levels begin to drop significantly with age and should be monitored during regular health and wellness checkups. The entire content of CoQ10 within any person’s body should be in the range of 500-1500mg. Typical dosages of CoQ10 supplementation ranges from 20mg range, taken in divided doses throughout the day. Doses as high as 200mg have been noted in some cases (R). The only side effects common to CoQ10 are insomnia and digestive upset—both typically mild.

Just like other dietary supplements, the induction of highly concentrated compounds into the body causes mild to severe side effects, depending on the individual body’s reaction. Nausea, rashes, increased sensitivity, headaches, fatigue and abdominal pains are among the side effects to expect especially for first time users. Fortunately, there are no known adverse effects of using Coenzyme Q10 at any amount or concentration.

CoQ10 is one of the most important anti-inflammatory compounds in our bodies. We feel it’s important to anyone seeking better health to understand its role in helping maintain our balance of health. Let us know if you enjoyed this article by using the rating box below

Reader Rating110 Votes4.75
The OrganicNewsroom is a participant in the Amazon Services LLC Associates Program, an affiliate advertising program that helps us earn advertising fees by advertising and linking to Amazon.com. Read our article How We Make Money for a detailed explanation of these types of services.

The Positive Impact CBD Has on Your Body

4 Ways To Protect Your Eyes From The Sun

How Parents Can Balance Staying Sober and Parenting

6 Reasons Why You Should Try Growing Your Own Food

What You Should Do Before You Go into Hospital

The Positive Impact CBD Has on Your Body