Lactobacillus Rhamnosus also referred to as L. Rhamnosus, is a bacterial microorganism that is commonly found in probiotic supplements used to promote healthy digestive function. L. rhamnosus is one of many non-colonizing transient bacteria of the human gastrointestinal tract and has been shown to provide notable benefits to neural pathways, the immune system, and in the treatment of candida.

Lactobacillus Rhamnosus is a non-colonizing bacterium that is part of the lactic acid producing genus, Lactobacillus. As with other members of the Lactobacillus genus, L. Rhamnosus are aptly named for their production of lactic acid. Lactic acid is an organic compound that is found naturally in many dairy products (as a by-product of containing bacteria) and is also FDA approved as a food preservative. This compound is also found in the human digestive tract (among other places) and is attributed to providing benefits for mood, energy, immunity, and many other aspects of our health. 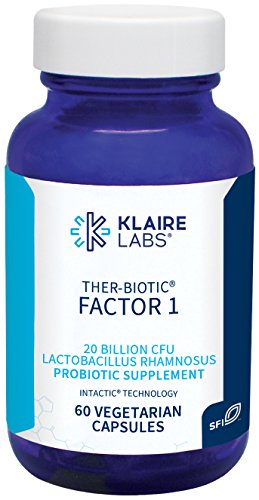 There is a large body of growing research that points to Lactobacillus Rhamnosus possessing the ability to have a tremendously positive impact on gut health as well as neurological function (R)(R). There are instances when L. Rhamnosus isn’t tolerated well but most accounts describe benefits on a holistic scale. Below are some of the better-documented aspects of our health of which L.rhamnosus has shown great supportive potential.

The human immune system is still largely a mystery. We understand the basics, sure, but when it comes to understanding how specific bacterium might affect the outcome of overall immunity Science is still in a sort of Wild West type of state. Lactobacillus rhamnosus has been studied for its impact on modulating immune responses.

These types of responses are often measured by analysis of certain compounds such as Interleukins, Tumor Necrosis Factors, and C-Reactive Protein. This helps gauge the degree of immune responses in many cases. L.Rhamnosus has shown the abiliy to create a positive modulation of these compounds and is associated with positive impacts on the human immune system.

One study, for example, found that oral administration of L.Rhamnosus CRL1505 was able to have helped treat viral infections of the lungs (R)! This is exciting for two reasons; one, it strengthens the case for probiotics (L.rhamnosus particularly) and two, it illustrates how strange the dynamics of our immune systems can be. After all, it’s not exactly common sense to think that eating bacteria might help ward off respiratory infection.

Lactobacillus Rhamnosus was discovered in 1983 living in the intestines of a healthy human subject and was considered remarkable for its ability to thrive in highly-acidic environments such as stomach and digestive acids. It is this inherent ability which allows L. Rhamnosus to flourish in humans and promote robust gut health. As opposed to several other Lactobacillus strains, L. Rhamnosus is considered a transient strain—meaning that without semi-regular consumption it is unlikely to remain present in the GI tract (R)(PDF).

This is especially important to keep in mind since it means that continued supplementation of L.rhamnosus may be required to reap the benefits.

In 2010, a study published in Pediatrics found that when L. Rhamnosus was given to children with irritable bowel syndrome (IBS), a significant improvement of associated symptoms was seen (R). These benefits were seen, specifically, in the reduction of abdominal pain, and a decrease in bowel movement frequency.

Candida is a term often used to describe varying imbalances of bacteria within the Candida family, such as Candida Albicans. These bacteria thrive on carbohydrates and sugar and can easily become an issue for those eating typical Western diets. Candida overgrowths are more common among women, though can impact anyone.

Lactobacillus Rhamnosus has been found to provide effective treatment for vulvovaginal candidiasis, a common vaginal yeast infection (R). In conjunction with other probiotics and, in some cases pharmaceutical-grade antifungals, L. Rhamnosus has been shown to inhibit the growth of candida, allowing for effective elimination protocols to be enacted. Being that Candida is such a difficult condition to treat effectively, Lactobacillus Rhamnosus offers offers much needed hope to many.

While conducting a study on mice researchers found that those given a broth fortified with Lactobacillus Rhamnosus were less likely to show signs of anxiety (R) and had higher levels of Gama-Aminobutyric acid (GABA). GABA is one of the most abundant neurotransmitters in the human brain and is attributed as a calming compound.

Many bacteria in the Lactobacillus family are thought to convert such compounds as glutamate into GABA which then find their way to the brain (R). In addition to higher levels of GABA and GABA receptor proteins, the mice were also shown to possess lower stress hormones, indicating that Lactobacillus Rhamnosus shows tremendous potential in the treatment of both stress and anxiety.

While glucose is commonly regarded as being the primary source of energy for cellular tissue within the human body, there are also data to suggest that Lactate, a derivative of lactic acid, is preferentially chosen as the metabolite of choice by neurons in the brain (R). That is to say; when given a choice, your brain would rather use lactate than glucose to give its problem solving skills a boost

This new concept of lactate—not glucose—being the preferred metabolite for neural cells turns many commonly-held dietary regards upside down. We’ve all heard of athletes “carbing-up” before a performance, but research suggests that we should also advice our “mathletes” to “lactate-up” before brain-intensive computations.

While Lactobacillus Rhamnosus seems to show potential to address several health conditions, it has also been known to impact health conditions negatively in a small amount of cases. As with many other probiotics, there is a risk of the host body falling into a septic state (R). Researchers that have noted such potential for septic responses from L.rhamnosus also point out that such beneficial bacteria can fight septicemia caused by other bacteria. In other words, it’s more likely to help fight off other bacteria than it is to become a problem itself.

Lactobacillus Rhamnosus is commonly found in probiotic supplements advertised to provide immune support, digestive support, and overall support for a more healthy-you. Frequently, L. Rhamnosus is found offered as part of a synergistic probiotic blend—containing several other varieties of transient and colonizing bacteria and yeast thought to provide health benefits.

A great example of one of these synergistic products is the Ther-Biotic Factor-1 by Klaire Labs. This product contains Lactobacillus Rhamnosus,  Bifidobacterium Bifidum, and Lactobacillus Casei. Klaire Labs has a long record of providing the most-potent probiotics on the market, and is trusted by many Integrated Doctors and Health Practitioners to address a wide variety of issues centered around the gastrointestinal tract.

Bacteria vary wildly from sample to sample. Even among unique species, there is a remarkable genetic variation between sub-species. This means that L.rhamnosus bacteria from one source might not be the genetic equivalent of L.rhamnosus bacteria from another source. To ensure the highest chance of reaping the benefits of L.rhamnosus, at least thought observed in clinical research, it’s important to note the specific sub-species used during the Scientific study. The “GG” subspecies type of L.rhamnosus is the most widely studied type of L.rhamnosus (R). Look for supplements with the ingredient listed as Lactobacillus rhamnosus GG to ensure you’re getting the same bacteria that has scientific support.

All supplements and organic consumer products must be considered with their shelf lives in mind. Just like one wouldn’t expect milk to maintain its quality over time so too should one recognize that probiotics can become less-potent (or even inactive) if taken after their best-by dates. Buying from trusted supplement brands and retailers can help ensure potency.

Generally, probiotics come in one of two varieties: freeze-dried or living. Freeze-dried probiotics are labeled as “shelf stable” in many cases and don’t require refrigeration to maintain their potency (it still helps though.) Living bacteria probiotics are considered more potent than shelf-stable varieties but require refrigeration throughout their entire product. That means living bacteria probiotics, from the time they are bottled and shipped from the manufacturer to the time they reach you, must be refrigerated or else they’ll be ruined.

There is some mixed sentiment regarding the effectiveness of live cultures vs. dead cultures in the probiotics world, but both sides of the argument seem to recognize that both forms are able to produce positive benefits (R). We’ve got an article written with Klaire Labs that helps explain some of the pitfalls of buying probiotics.

Probiotics are often attributed to helping improve gut health, cognitive health, and overall immunity. There’s a lot of research out there to suggest that such claims are warranted but there are still miles for researchers to travel before we know the specifics. Lactobacillus rhamnosus is one of the better-studied species of probiotics that have demonstrated health benefits when taken as a supplement. This probiotic has shown specific benefits for those with IBS symptoms, depression, and anxiety. If you are considering taking L.rhamnosus probiotics it’s important to buy from quality supplement brands and look for clinically-studied sub-species varieties, such as Lactobacillus rhamnosus GG.

We work hard to provide in-depth discussions on topics we feel are important to maintaining better health. Lactobacillus rhamnosus is an interesting probiotic that we feel may provide lasting health benefits. Let us know how we did by rating this article below.

Reader Rating3 Votes4.35
The OrganicNewsroom is a participant in the Amazon Services LLC Associates Program, an affiliate advertising program that helps us earn advertising fees by advertising and linking to Amazon.com. Read our article How We Make Money for a detailed explanation of these types of services.