Phosphatidylserine is a fatty compound heavily involved in maintaining the health of cellular membranes. Phosphatidylserine plays an integral role in maintaining healthy brain cells as we age, and has shown potential as an effective Alzheimer’s treatment and preventative. In addition to the brain-boosting benefits of Phosphatidylserine, it has also shown the ability to help boost overall energy levels, reduce aggressive in ADHD patients, and help reduce anxiety.

There are very few phosphatidylserine side effects, and a recommended dose as high as 600mg per day has been recorded to result in no unwanted side-effects. Phosphatidylserine has shown such promise in its ability to help address issues of cognitive decline as we age, that the FDA has approved some minimal health claims to be made by supplement manufacturers. While this may seem minor, nearly every claim made on the label of nutritional supplements contains a ‘Statement not evaluated by the FDA’ disclaimer, and those allowed actual claims represent compounds with significant research having been conducted. 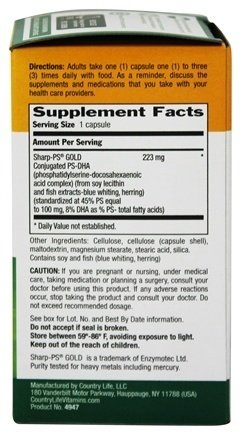 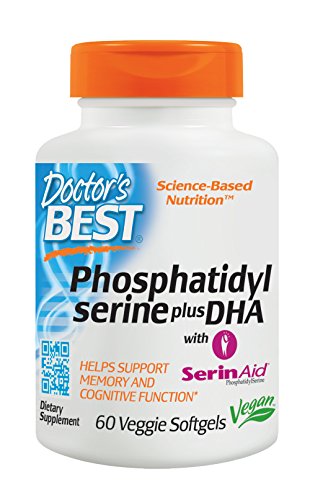 Phosphatidylserine is among the class of compounds named phospholipids, but many don’t realize that it was the original phospholipid. Phosphatidylserine was first discovered in 1847 by a French scientist that was investigating sub-compounds of lecithin found in chicken eggs. This long history has done little for the mainstream awareness of Phosphatidylserine but certainly speaks to the volumes of its deep integration throughout natural compounds.

Phosphatidylserine is of particular use in building cellular membranes because, due to its phospholipid nature, it is capable of forming a bi-layer structure. This dual-purpose structure around your cellular innards is the key to regulating cellular function and communication throughout your body. In spite of the lack of mainstream awareness, a 2010 study found that Phosphatidylserine, phosphatidylcholine, and Ginko Biloba to be the three most often-recommended products for staving off cognitive decline [1].

Phosphatidylserine is found in particularly high concentrations within your brain and accounts for nearly 15% of all phospholipids found in neural cellular membranes [2]. Considering what an integral role this compound plays in the health and functionality of your brain cells, it’s little wonder that much of its acclaim comes from investigations into neurodegenerative diseases. Phosphatidylserine has been shown to provide benefit to those suffering from early-stage Alzheimer’s [3], as well as general cognitive function among elderly people.

Maintaining adequate levels of Phosphatidylserine has quickly become regarded as being one of the most common-sense approaches to maintaining mental health. Phosphatidylserine is found in large amounts in soy, as is phosphatidylcholine. Other sources include cow brains, mackerel, and chicken hearts. Sunflower has also been known to be a commercially viable source of phosphatidylserine and has become a popular source in recent years.

Being such an integral part of your cellular membrane structures, Phosphatidylserine has been shown to have the potential to impact many aspects of your health. Research into the benefits of Phosphatidylserine is largely centered on the use of cow brain sourced Phosphatidylserine—which in some cases seems to produce different results.

The risk of ‘mad-cow’ disease has stemmed the interest in the use of this form, as well as cost prohibitive cultivating due to the only 3g of Phosphatidylserine being found in a single cow’s brain [4]. Even with the nuances of availability and dynamics of function, there still exists a large body of data showing that Phosphatidylserine can impact your health in many positive ways.

Phosphatidylserine has been investigated as a memory-improving and memory-recovering agent in many different clinical settings. One study found that in elderly women, Phosphatidylserine was able to help improve their performance on memory exercises. These women were within the age range of 50-69 and chosen on the basis of them describing difficulties in performing memory-related tasks [5].

Phosphatidylserine has been investigated in numerous studies to determine its potential to help stabilize and reduce levels of cortisol—the ‘stress’ hormone. While many associate elevated cortisol levels with hypertension and cognitive stress, cortisol levels are deeply connected to physical activity as well. One study investigated the effects of Phosphatidylserine on the cortisol levels of men that were considered to be active cyclists—known to perform physically stressful activities for long periods of time [6].

Researchers gave the men of this study Phosphatidylserine as an oral supplement and then directed them to perform cycling exercises at varying stages of physical exertion. They found that those given the Phosphatidylserine were able to perform for a longer period of time while maintaining the same levels of cortisol levels. Simply put, Phosphatidylserine seems to help you go harder for longer without added stress!

Attention Deficit Hyperactivity Disorder (ADHD) is a cognitive syndrome which is characterized by extreme levels of energy, emotional instability, and difficulty focusing on single tasks for any given period of time. Typically, ADHD is most readily associated with children, but up to 4% of adults in the United States are thought to suffer from this disorder as well [7]. That being said, much of the research related to Phosphatidylserine’s ability to help treat ADHD is centered on child research

. One study found that over a 15 week period of time, those volunteers given the Phosphatidylserine showed a significant reduction in symptoms of restlessness and impulsive behavior.  Overall, this study concluded that Phosphatidylserine may be particularly effective in the treatment of ADHD symptoms [8]. In one study, researchers found that when combining Phosphatidylserine with a fish oil supplement, the reduction of Attention Deficit symptoms was even more greatly-reduced [9].

Phosphatidylserine is used by many as a Nootropic compound to help balance out other Nootropics that cause an increase in the uptake of acetylcholine, such as Racetams. Phosphatidylserine has also demonstrated a remarkable ability to boost overall recall and learning speeds by an impressive amount.  One study investigated the ability to perform mental tasks directly after strenuous exercise. Of the volunteers that were given Phosphatidylserine, the total amount of errors in the calculation was reduced by nearly 40%, and the number of calculations completed saw an increase of 13% [10].

While most cognitive studies are generally regarded as taking place in calm, relaxed conditions, it’s truly interesting to see how Phosphatidylserine is able to help boost mental performance post-athletic performance. Surprising to say, Phosphatidylserine may very well become highly-sought after by athletes looking to garner an extra edge over the competition. After all, playing smarter has been known to trump playing harder in many situations.

Phosphatidylserine has become popular enough in recent years that may supplement manufacturers now offer it. It’s often included in designer Nootropic supplements, such as Alpha Brain from Onnit. Most of the supporting research for phosphatidylserine benefits on learning and cognitive effects have been conducted on bovine-sourced PS. This form isn’t available, and likely should be avoided at all cost with respect to ‘mad cow disease’. The tiny little proteins that cause mad cow disease are hard to detect, hard to eradicate, and can lay dormant for decades before causing symptoms.

Most Phosphatidylserine products these days are soy-based and are chemically-different from that of bovine sourced compounds. There are many anecdotal accounts of people not experiencing the memory-boosting effects of soy-based phosphatidylserine—and little should be expected from it at this point. There are also sunflower-based phosphatidylserine products, though the fatty-acid composition of these compounds is also similar to soy-based products. This likely won’t help achieve any better results than non-bovine sourced PS, but would likely help reduce the presence of GMO ingredients.

In an attempt to mimic the composition of bovine-sourced products, some supplements such as Phosphatidylserine + DHA from Doctor’s Best attach a DHA molecule to PS. This product contains the non-GMO, patented, SerinAid compound produced by the ChemiNutra corporation. This is has shown higher DHA enrichment in manufacturer-based animal research. Phosphatidylserine is regarded as highly-safe, and the best way to find out if it may benefit you is to try it out for yourself. Below are some phosphatidylserine supplements we feel offer the highest quality and best-designed forms available.

Phosphatidylserine is considered to be a very-safe compound to supplement with and very native to the functions of your body. As mentioned above, Phosphatidylserine is produced naturally within your body, so there are very specialized pathways capable of getting it where it needs to go. Bovine-sourced Phosphatidylserine products are the only real caution here, and you likely wouldn’t be able to find a commercially-available one anywhere in the United States. The most prevalent source of Phosphatidylserine is from Soybeans as Soy Lecithin, which is one of the most genetically-altered crops on Earth currently.

GMO Soy accounts for roughly 93% of all Soy products produced in the United States—even more so than corn, or cotton [11]. While there is much debate on the potential impact of GMO products on long-term health, avoiding them is the safest move until more comprehensive independent research can be produced.  Soy products are also known to act as Estrogen analogs, and can potentially decrease overall levels of Testosterone. In its highly-isolated form, however, Phosphatidylserine has been shown to have absolutely no impact on Testosterone levels whatsoever [12].

Phosphatidylserine is a natural compound and is fairly well-tolerated in high doses. A typical recommended dose of PS would be 100mg 3 times a day, taken with a meal. PS is a fat-soluble compound and is, therefore, best taken with other dietary fats to increase the absorption rate. In a study conducted among elderly volunteers, it was found that no adverse side effects were seen with doses as high as 200mg was taken three times daily, for a total of 600mg in a 24 hour period of time [13]. This study focused on soybean-derived phosphatidylserine rather than brain-cortex derived PS which has been used in past clinical investigation. The soybean-derived compound is the type of phosphatidylserine that is found in supplements available on the consumer market.

Phosphatidylserine is a remarkable compound that has been proven to benefit our health in many different capacities. Research has shown time and time again that this compound may be able to help prevent cognitive decline as we age. The benefits of phosphatidylserine have been so well-documented that the FDA has even approved manufacturers to label their products as providing health benefits.

This is very atypical of natural compounds and speaks volumes to the ability of phosphatidylserine to help boost our health. One interesting aspect to keep in mind is the added benefit of mixing phosphatidylserine with fish oil compounds for added benefit. Research on this is still being gathered, but being as both supplements are generally regarded as safe—you may want to experiment a little to see how this combination may benefit you.